In the early 20th century, the desire to see clothing in motion flourished on both sides of the Atlantic: models tangoed, slithered, swaggered, and undulated before customers in couture houses and department stores. The Mechanical Smile traces the history of the earliest fashion shows in France and the United States from their origins in the 1880s to 1929, situating them in the context of modernism and the rationalization of the body. Fashion shows came into being concurrently with film, and this book explores the connections between fashion and early cinema, which arguably functioned as what Walter Benjamin called ‘new velocities’ – forces that altered the rhythms of modern life. Using significant new archival evidence, The Mechanical Smile shows how so-called ‘mannequin parades’ employed the visual language of modernism to translate business and management methods into visual seduction. Caroline Evans, a leading fashion historian, argues for an expanded definition of modernism as both gestural and performative, drawing on literary and performance theory rather than relying on art and design history. The fashion show, Evans posits, is a singular nodal point where the disparate histories of commerce, modernism, gender, and the body converge.

Read an extract from The Mechanical Smile,  available now from Yale University Press, and see a full gallery of images on our Facebook page.

The history of the early fashion shows in the United States of America and France from about the 1880s to 1929 identifies their relationship to modernism. It argues that the Fordist aesthetics of the fashion show produced a modernist and rationalised body in which commerce and culture converged. By asserting that the show translated what one journalist called the ‘arithmetic of fashion’ into visual seduction, the book brings economic and design history together in a new formation. Indeed, the fashion show is a nodal point for the convergence of several different histories rarely written about together: those of business, international trade, consumption, women, work and fashion, as well as cinema, revue theatre and visual art. The research for the book has led me to new sources, in particular film of the silent period, and new ways of thinking about theory as both historical and contingent. It has spurred me to think about new methods for writing about the history of the body, and to investigate how its ephemeral and intangible t—s linger in fashionable ways of walking, moving and posing. As a result, the book makes the case for understanding fashion in a wider context than those of material culture and design history alone. It suggests that fashion is also an embodied, four-dimensional practise that exists in both space and time and, therefore, that it is an important, if often overlooked, part of the history of sensibilities as well as of commerce and culture.

The book falls into two parts consisting of six chapters of each. Part I, a history of the fashion shows  from 1900, including a chapter on their nineteenth-century prehistory, introduces the key themes of the book: modernism, gender, class, the rationalisation of the body, and the commercial and cultural relations between America and France, both in the international garment trade and in the wider culture. It thus contains both synchronic and diachronic accounts, linking the history of the show to other aspects of the visual culture of the period. Part II develops and explores some contradictions that emerged in Part I, by focusing on the contradictory figure of the mannequin, as the fashion model was called. These include: her ambiguous status as both object and subject; her physical malleability that mirrored the psychological malleability of the ‘New Woman’; and her embodiment (highly disturbing to her contemporaries) of future sensibilities.

As a history of the first fashion shows, the book brings much new knowledge into the public domain and revises aspects of the existing literature that are either incomplete or erroneous. It shows how, from the nineteenth century, French haute couture was a global export industry, rather than a luxury trade catering only to rich individual clients, as is suggested in many older histories of couture. It argues that this was the reason for the emergence of fashion shows, to sell the biannual collections to international buyers coming twice a year to Paris. The Paris trade was, however, an unusual one, in that it exported not goods but ideas, in the form of model dresses and the right to reproduce them. These were bought by overseas manufacturers to recreate them in simplified form on a mass scale for their domestic markets. Buyers from all over the world converged on Paris twice a tear from the biannual collections but the most powerful were the North Americans, with their vast domestic markets and larger manufacturing capacity. That is why the book focuses on France and America alone, as respectively, the most important exporter and the most important imported of the international fashion trade. The coverage of the early twentieth-century fashion show foregrounds an aspect of fashion rarely covered by historians, the crucial interface between the craft-based French fashion system and the mass production of the American garment industry.

Even so, this is not a complete history of fashion shows in both France and America over thirty years, as it leaves many gaps. Rather, it is the history of the relationship between the two countries, plated out in the interaction of the fashion industries of each, a relationship which was therefore commercial, cultural and ideological at once. I have focused on the important periods of the Franco-American relationship as it developed over thirty years, rather than on the parallel developments of the fashion show in each country. That is why, for example, although all six chapters of Part I emphasise the importance of the idea of French fashion to the Americans, only one, Chapter 4, is devoted to American fashion shows. Chapters 5 and 6 nevertheless show how the idea of ‘American-ness’ (américanisme) dominated French fashion in the 1920s, a shift due largely to economic factors, namely the impoverishment of France due to the First World War and changed in the relative  values of the franc and the dollar in the post-war years.

Beyond the claims of individual designers, I looked to structures rather than narrative to think about this relationship. Certainly, there is no narrative to the fashion show: some women come into a room, they walk up and down and they exit. Other women, and a few men, look at them. This does on for decades. The story of fashion modelling is far from exiting. On the contrary, it is stupefying monotonous. What gives it meaning are its commercial and cultural structures. These encompass the history of garment trade relations between France and America; the ideas of F. W. Taylor, published in 1911, on ‘the scientific management of the workplace’; the development of mass production and the invention of Henry Ford’s moving automotive assembly line in 113; the emancipation of women; the development of cinema, variety theatre and the chorus line as modern forms of popular entertainment; and, in visual culture and art, the move towards abstraction, simultaneity and machine aesthetics.

– Extract from the Introduction to The Mechanical Smile by Caroline Evans. 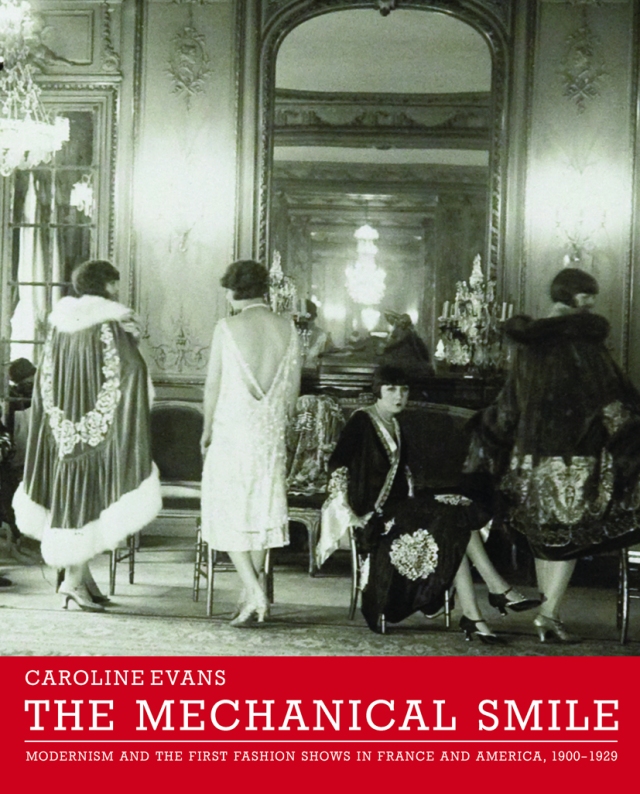