Earthmasters: The Dawn of the Age of Climate Engineering by Clive Hamilton goes to the heart of the unfolding reality of the twenty-first century: international efforts to reduce greenhouse gas emissions have all failed and before the end of the century Earth is projected to be warmer than it has been for 15 million years. The question, ‘can the crisis be avoided?’ has been superseded by a more frightening one, ‘what can be done to prevent the devastation of the living world?’ In this author article for the Yale Books blog, Clive Hamilton introduces some of the staggeringly ambitious technologies being developed in the field of geoengineering – the intentional, enduring, large-scale manipulation of Earth’s climate system. He discusses the arguments for and against climate engineering, and reveals the extent of vested interests linking researchers, venture capitalists, and corporations. Can we avert a climate catastrophe?

Climate scientists have watched with mounting alarm as carbon dioxide concentrations have increased relentlessly. The anxiety has deepened each year as it has become clearer that the range of emissions paths mapped out by experts in the 1990s and early 2000s were unduly optimistic. The actual growth in emissions—boosted by explosive growth in China—has described a pathway that is worse than the worst-case scenario.

Alarm has spread to staid organisations with the World Bank warning last year that “we’re on track for a 4°C warmer world marked by extreme heat-waves, declining global food stocks, loss of ecosystems and biodiversity, and life-threatening sea level rise.”

At the same time, climate scientists began to focus on the dangers of feedback effects in the climate system, that is, processes that amplify or dampen the direct warming effect of rising greenhouse gases. For example, as warming melts the Arctic ice-cap the exposed water is darker than the highly reflective ice it replaces and so absorbs more heat from the Sun. The melting of sea ice this past northern summer set new records.

Against this background, scientists began to talk about possible responses to a climate emergency—such as a massive methane release with rapid melting of permafrost, the collapse of the West Antarctic ice sheet, or rapid dieback of the Amazon forests.

Any of these could quickly shift the global climate into a new state, and there would be no way of recovering the situation. How, they asked, could we intervene to prevent these things happening? If Plan A, persuading the world to cut emissions, is failing, shouldn’t we have a Plan B?

And so in the last few years research into various schemes to engineer the climate has been accelerating.

Geoengineering may be defined as deliberate, large-scale intervention in the climate system designed to counter global warming or offset some of its effects. More than 40 schemes have been put forward, with some the subject of intensive research. [See the glossary at the end of the article for some of the main ones.]

When we dig up and burn fossil carbon we make use of its trapped energy; but the carbon atoms do not disappear. So where do they go? First they go into the atmosphere. Some is then soaked up by vegetation. Some sooner or later ends up in the various layers of the oceans. The deep ocean has the capacity to absorb large amounts of carbon dioxide from the atmosphere, and it would help if we could get more carbon down there and hope that it stays.

But how do we get carbon to the deep ocean? The answer lies in what is known as the biological pump. Tiny marine plants known as phytoplankton grow by combining carbon dioxide, various minerals and sunlight to multiply into blooms. On death, gravity causes the plankton to sink.

The effectiveness of the biological pump depends on the suitability of conditions for marine life, including the availability of micronutrients, especially iron. If a shortage of iron is limiting plankton growth in an area of ocean then perhaps the artificial addition of the missing ingredient can stimulate algal blooms.

Fertilizing some areas of ocean with iron slurry does indeed induce algal blooms. But it turns out that much of the carbon fixed in the phytoplankton does not find its way to the ocean floor but circulates in the surface waters, feeding the food chain, before being emitted as carbon dioxide back into the atmosphere.

And while iron fertilization stimulates biological productivity in one area, nutrient stealing can see it fall in others. As one expert said: “you might make some of the ocean greener by iron enrichment, but you’re going to make a lot of the ocean bluer”.

It’s been estimated that a massive fertilization effort over 100 years could absorb perhaps 3 per cent of cumulative emissions from burning fossil fuels over the same period. In the meantime, ocean acidification and temperatures would reach a level at which algal populations would be severely reduced. This is one reason why climate engineering without emission cuts would be disastrous.

The form of geoengineering most likely to be deployed is known as sulphate aerosol injection. The proposal is to spray sulphur dioxide or sulphuric acid into the upper atmosphere to form tiny particles that would reflect an extra one or two per cent of incoming solar radiation back into space, thereby cooling the planet.

The most likely delivery method is a fleet of customized high-flying aircraft fitted with tanks and spraying equipment, although a hose suspended in the sky is also being investigated. In effect, humans would be installing a radiative shield between the Earth and the Sun, one that could be adjusted by those who control it to regulate the temperature of the planet.

How effective would such a solar filter be in suppressing warming? All the models indicate that if we reduced the amount of sunlight reaching the planet the Earth would indeed cool fairly quickly and evenly, although with less effect at the poles. The models also show that rainfall would be returned some way towards pre-warming patterns. Crucially, the solar shield would do nothing to offset the acidification of the oceans due to carbon emissions.

However, other atmospheric scientists argue that the complexity of the climate system means that it is impossible to draw any firm conclusions about the consequences of such a radical intervention in the Earth system. And it is thought that injecting enough sulphur to offset human-induced warming would delay the recovery of the Antarctic ozone hole by 30 to 70 years.

Other studies indicate that the Indian monsoon could be seriously disrupted, affecting food supplies for up to two billion people, although the disruption may be less than in a scenario of warming without the solar filter.

One problem with sulphate aerosol spraying—described as the “killer objection” objection— is that we can only get a good idea of how it would work by full-scale implementation. Even then we would need at least 10 years of global climate data before we had enough information to separate out the effects of sulphate aerosol spraying from natural climate variability and, indeed, from the effects of human-induced climate change. The levels of omniscience and omnipotence required to make it work really would have us playing God.

To compound the risks, if after 10 years, when we accumulated enough data to decide that our intervention was not a good idea it may be impossible to terminate the solar shield. Why should this be so?

According to one study, if sulphate aerosol spraying began in 2020 and had to be stopped after 40 years, we would see a surge in average temperature by a scorching 1.3ºC in the first decade, falling back to 0.33ºC in the following decade. Yet it’s estimated that if warming occurs at a rate of 0.3ºC per decade only 30 per cent of ecosystems can adapt. So once deployed it is likely that we would become dependent on our solar filter, the more so if we failed to take the opportunity while it was in place to cut greenhouse gas emissions sharply.

A constituency advocating investment in a major research program has now emerged, and is gaining influence. Bill Gates has been persuaded to commit several million dollars to finance research into geoengineering. Gates is now an investor in various geoengineering enterprises, pointing to the privatization of planet-saving technologies.

Richard Branson is also promoting geoengineering as a response to climate change. Oil companies, anticipating a shift in the political landscape, are quietly backing research into geoengineering.

In recent years there has been a flurry of patents taken out over methods to engineer the climate. One of them is so broad that, if enforceable, it would place fertilization of the oceans in the hands of one man. We are approaching a situation in which international efforts to protect humanity from climate catastrophe could depend on whether or not one company wants to sell its intellectual property.

Burgeoning commercial engagement in geoengineering is creating a constituency with an interest in more research and, eventually, deployment. Such a lobby is naturally predisposed to argue that pursuing emission cuts is ‘unrealistic’ or ‘politically impossible’ and therefore geoengineering is the sensible alternative. This is the slippery slope concern about researching geoengineering.

All of which points to perhaps the greatest risk of research into geoengineering—it will erode the incentive to cut emissions. In a political and commercial environment where cutting emissions appears too hard, geoengineering arrives as the next great white hope. Which government would not be enticed by the technofix to beat all technofixes? No need to take on powerful fossil fuel companies, no need to tax petrol and electricity, no need to ask consumers to change their lifestyles. And instead of global warming being proof of human failure, geoengineering could be the triumph of human ingenuity. 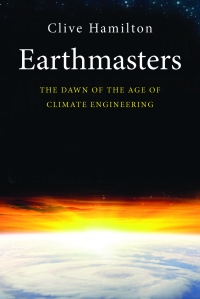 If burning fossil fuels puts carbon dioxide into the atmosphere, can we get it out?

Air capture—extracting CO2 directly from the air using metal boxes or ‘sodium trees’. The captured CO2 then has to be concentrated and piped to a burial site underground, if they can be found.

Biochar—when heated without oxygen plant material turns into charcoal. This biochar, with its trapped carbon, can be spread on the soil and lasts for many decades, even centuries.

Liming the oceans—oceans absorb some of the CO2 from the air, but the extra CO2 also makes them more acidic. Adding lime would offset the acidification allowing more CO2 to be soaked up.

If the earth is getting too hot can we reduce the amount of sunlight reaching the surface, and so cool the planet?

Marine cloud brightening—a serious proposal involving a fleet of special ships spraying micro-droplets of water into the air to aid the formation of low-lying marine clouds that reflect some sunlight back into space.

Painting roofs white—it works but there are not enough roofs and roads to make a difference.

Space mirrors—millions of small ones could be oriented to reflect sunlight away from Earth, but it’s still science fiction.