Eva Hesse (1936 – 1970) was a Jewish German-born American sculptor and artist, who habitually challenged conventions. She is best known for her pioneering work in materials such as latex, fiberglass and plastics. Hesse was also one of the leaders of the movement from sculptural Minimalism to Postminimalism, which critic and philosopher Arthur Danto distinguishes by its ‘mirth and jokiness’, ‘nonmechanical repetition’ and even ‘unmistakeable whiff of eroticism’.

The exhibition ‘Eva Hesse, 1965’ was on display at the Hauser & Wirth gallery in London from 30th January until 9th of March. The collection documents the period spent by the artist in her native Germany, and embodies the sense of freedom, experimentation and creative success that she experienced there. Celia Graham Dixon visited the Hauser & Wirth on behalf of Yale University Press and here gives her impression of the exhibition and an introduction to Hesse’s work. 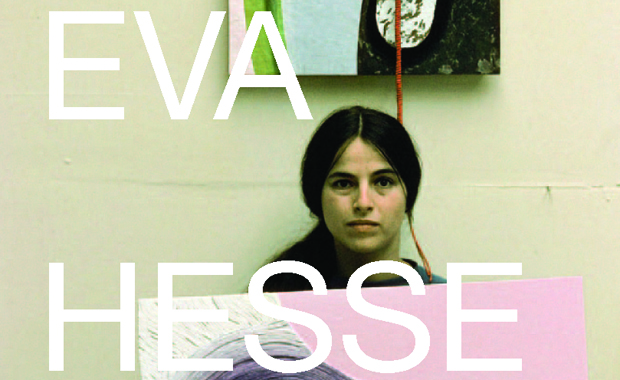 ‘Eva was worried about going back to Germany, but I said it would be a wonderful time to work free of the New York scene and to develop new ideas. You don’t need to worry about people looking over your shoulder… It was just a period of experimentation’. – Tom Doyle

In June 1964, Eva Hesse and her husband Tom Doyle left New York and its energetic art scene for the small town of Kettwig der Ruhr in Germany. Born in Hamburg in 1936, this would be the first time Eva Hesse had returned to Germany since the end of 1938, when she and her sister managed to flee via kindertransport.

At that time, Doyle was the more famous of the two, and had been invited to take up an artist’s residency in an abandoned textile factory belonging to German textile manufacturer and collector Friedrich Arnhard Scheidt. Hesse went with him, and it was there that this ‘period of experimentation’ became a decisive point in her career. Eva Hesse, 1965 documents the work that she produced in this time and the strides she took from painter to sculptor.

The relocation, and return to her birthplace, was a cause of personal anxiety for Hesse. She struggled with her work, which she expressed in a letter to Sol LeWitt on March 18, 1965:

I have done drawings. Seems like hundreds although much less in numbers. There have been a few stages. First kind of like what was in the past, free crazy forms – well done and so on. They have a wild spaces, not constant, fluctuating and variety of forms etc. Paintings were enlarged versions, attempts as similar spaces – etc.

2nd stage. Contained forms somewhat harder often in boxes and forms become machine like. real like. as if to tell a story that they are contained. Paintings follow similarly.

3rd stage: Drawings-clean, clear – but crazy like machines. Forms larger and bolder. Articulately described. So it is weird. They become real nonsense.

The difficulty, inarticulacy and refusal to stay still that comes across here is presented as a curatorial and formal narrative in the first room of the exhibition. Moving clockwise around the room, one is able to follow Hesse’s development from the two dimensional into the three dimensional.

The first wall displays three of what Hesse called the ‘contained forms’. In these, an asymmetric grid system contains the forms depicted. ‘Machine like. real like’, the shapes lie reluctantly flat on the canvas, uncomfortable somehow with their two-dimensionality. Flowing organically around the canvas, they are both bulbous and bulging, and by the third painting they have the effect of pushing through the grid, which by this point has close to fallen away entirely.

It is when we arrive at the physically absurd relief works that a feeling of catharsis ensues. After the anxious energy of the paintings, it is almost a relief to be met with these farcical eruptions of three dimensionality. The forms have come off the wall and into life – a theme that will come to characterise Hesse’s work of this period.

Hesse used obsolete industrial parts that she found lying about the factory for these works, the same ones in fact, that had influenced the ‘contained forms’ and mechanical drawings. Rather than just observing them, as before, Hesse picks them up, sticks them down, hangs them off and screws them in. Interacting much more with her materials, her activity is like that of a sculptor. She moves away from the canvas at this point, preferring to use masonite and wood, as well as plaster, wood shavings and particle board.

Like in the paintings, it is hard to tell whether these forms are human or mechanical. In one way, they are completely alien, but in another they seem mischievously human. They jump, curl and grow out of the surface, behaving as if they were natural objects, or some sort of peculiar mould.

These works have been lit in such a way that the strange attachments cast shadows back onto their coloured planes, playing further with the idea of a natural or human presence. In Legs of a Walking Ball, we see a yellow head in profile. The ball (‘machine like’) has been given legs (‘real like’) and has used them to walk off the canvas, protruding alarmingly towards the viewer. The central, cell like shape seems to be swelling and undulating, threatening also to erupt into sculpture.

Hesse’s work during this period is spasmodic, indecisive and agitated. It jumps and falls off the wall with upheaval and vigour. The energy of moving into a new physical territory pushed Hesse into a new sculptural territory, one where her lines and shapes come alive. Like the red cord that falls from its surface in An Ear in a Pond, Hesse is tentatively feeling out her new surroundings with this work, paving the way for the sculptural leaps she will take in years to come.

‘This diary must never be printed!’: Playwright August Strindberg and The Occult

The Swedish playwright August Strindberg was, amongst other things, a mercurial talent, artist, occultist, husband and father. He…