It is 600 years since the birth of Joan of Arc,  the heroine who led the French army during the Hundred Years’ War and who was eventually burned at the stake when she was only 19 years old. Since her death, politicians, writers, musicians and artists have used this powerful icon as a means to get their message across, but perhaps we have lost sight of who Joan of Arc really was. Today we look at a fascinating book from Yale that will help shed some light on this pivotal figure in French history.

Whether a lunatic, a witch, a religious icon, or a skilled soldier and leader, Joan of Arc’s contemporaries found her as extraordinary and fascinating as the legends that abound about her today. However, for Larissa Juliet Taylor, author of The Virgin Warrior: The Life and Death of Joan of Arc, her life has been so endlessly cast and recast (thanks to a variety of literary and dramatic adaptations and political appropriation) that we have lost sight of the remarkable girl at the heart of it.

As a teenaged peasant, Joan claimed that she had visions from God that instructed her to recover her homeland from English domination late in the Hundred Years’ War. The uncrowned King Charles VII sent her to the siege of Orléans, where she gained prominence and overcame the dismissive attitude of veteran commanders when she succeeded in lifing the siege in only nine days. Several more swift victories led to Charles VII’s coronation, settling the disputed succession to the throne.

Ultimately, she was captured, transferred to the English for money, put on trial by the pro-English Bishop of Beauvais, and burned at the stake when she was 19 years old. However, twenty-five years later, the Catholic church examined the trial, pronounced her innocent and declared her a martyr. Joan of Arc was beatified in 1909, canonized in 1920 and is now one of the Patron Saints of France.

She has remained a significant figure in Western culture. Numerous famous writers and composers have created works about her, including Shakespeare, Voltaire, Verdi, Tchaikovsky, Mark Twain, Bertolt Brecht and George Bernard Shaw. Depictions of her continue in film, theatre, television, music and even video games. From Napoleon onward, French politicians from across the political spectrum have invoked her memory, and in recent years her image has been appropriated by the far-right National Front party in France, who hold rallies at her statues and reproduce her likeness in party publications (much to the ire of opponents who regard this as ‘extreme right historiography’). 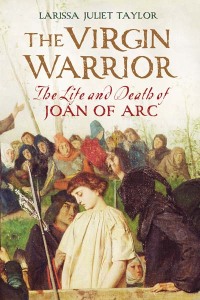 In The Virgin Warrior, Larissa Juliet Taylor looks beyond her cultural depiction, instead painting an accurate and vivid portrait of Joan as a self-confident, charismatic and supremely determined figure, whose sheer force of will electrified those around her and struck terror into the hearts of the English soldiers and leaders. The drama of Joan’s life is set against a world where visions and witchcraft were real, where saints could appear to peasants, battles and sieges decided the fate of kingdoms and rigged trials could result in burning at the stake. Yet in her short life, Joan emboldened the French soldiers and villagers with her strength and resolve. A difficult, inflexible leader, she defied her accusers and enemies to the end.

From her early years to the myths and fantasies that have swelled since her death, Taylor teases out a nuanced and engaging story of the truly irresistible ‘ordinary’ girl who rescued France.

The Past in French History

The Past in French History
by Robert Gildea

The past has a profound presence in French consciousness, perhaps more than that of any other nation. In this book, Robert Gildea explores France’s relationship with its own history and investigates some of the persistent themes in French political culture. It is essentially a book about “remembering”, about the ways in which the French remember potent national figures such as Joan of Arc and Napoleon.

The book begins with an historiographical survey of the broad schools of French historical writing, and then looks at the underlying themes which recur throughout the story of the French past. Gildea investigates such topics as revolution and counter-revolution, church and state, regionalism and centralism, nationalism and political identity, and demonstrates the way in which different versions of the past have been manufactured by competing political interests to further their cause. More

In this lively and pathbreaking book, William Monter sketches Europe’s increasing acceptance of autonomous female rulers between the late Middle Ages and the French Revolution. Monter surveys the governmental records of Europe’s thirty women monarchs – the famous (Mary Stuart, Elizabeth I, Catherine the Great) as well as the obscure (Charlotte of Cyprus, Isabel Clara Eugenia of the Netherlands) – describing how each of them achieved sovereign authority, wielded it, and (more often than men) abandoned it. Monter argues that Europe’s female kings, who ruled by divine right, experienced no significant political opposition despite their gender. More

The Virgin Warrior: The Life and Death of Joan of Arc is available now from Yale University Press.

When Harry Met Annie: Love and Financial Fraud in the Nineteenth Century (Part 1)

Harry Marks was one of the foremost financial journalists of the late nineteenth century. He was also a man…