This Seat of Mars: War and the British Isles, 1485-1746 by history professor Charles Carlton is an innovative and moving new book which explores the glorious and terrible impact of war. Here the author explains why he chose to write this book, outlining the particular importance of studying the effects of war on both ‘micro’ and ‘micro’ levels.

When I was a young soldier I remember someone asking our sergeant what was the army’s purpose. ‘The job of the army,’ the Second World War veteran replied, ‘is to kill the enemies of Queen Elizabeth the Second.’ Well, that’s oversimplifying it a bit, but it does highlight the essence of war. As the American Confederate general, Nathan Bedford Forrest observed, ‘war means fighting and fighting means killing.’ War permits the legitimate killing of our fellow creatures. It is one of man’s most unsocial deeds, yet requires strong social bonds to make it possible.

As an early modern military historian I wanted to examine the effect of war on the British Isles during the period I knew best. Since the heart of war’s darkness is killing, I felt that this should be the focus of my study. War affected the British at two levels, which, to borrow terms from Economics, can be described as the ‘macro’ and ‘micro’.  The first impacted the larger picture, being essentially chronological; the second impacted individuals, and was in many ways cyclical.

At the macro level, there were three periods of intense killing. During the last third of Elizabeth I‘s reign, England became involved in the conquest of Ireland, wars on the continent, and worldwide naval campaigns, in which some 55.6% of adult males served as soldiers or sailors: this supported Shakespeare’s contention that military service was one of the seven ages of man. Even bloodier were the British Civil Wars of the middle of the seventeenth century, in which 8.4% of the inhabitants of the Isles died directly or indirectly as a result of war: of these losses 4.6% were from England, 9.7% Scotland and 20.6% from Ireland. In other words, while Scotland and Ireland had almost half of England’s population, they incurred over two thirds of the deaths. England used this catastrophe to form a British State. After the Revolution of 1688, which led to the Nine Years War and the War of the Spanish Succession, Britain became a world power, with a growing empire that provided employment which reconciled the Scots and Irish to the new order. For instance, in 1757, of the British officers fighting in North America, 31.5% were Scots, as compared to 31% Irish, and only 24.5% English.

At the micro level individuals experienced war in a cyclical fashion. They had to be recruited and trained, and compelled to stay and fight in battle. Much of a soldier’s time was spent in low intensity combat, such as campaigning or garrison duty. High intensity combat, battles and sieges, was far more lethal. ‘When the hurlyburly’s done’, survivors have to deal with the losses of the loved ones, nightmares, the pain of wounds, and returning to civilian life.

In This Seat of Mars I have tried to interleave the macro and micro experience in alternating chapters. As I did so two things struck me. English historians have not recognised the important role that war played in shaping British history, and that war affected the lives of millions in unforgettable ways. There was, for instance, Ellis Gruffudd, Henry VIII’s veteran Welsh captain, who could have been a model for Shakespeare’s Fluellen. Or Henry Foster, the London apprentice who marched off the fight in the civil war eager for adventure and loot. Or John Blackadder (Yes, Baldrick, there really was a Captain Blackadder), who fought with the Duke of Marlborough, and in old age looked back on a career of killing and thought it to be ‘an odd unaccountable way of living.’ But such was — and is — war. 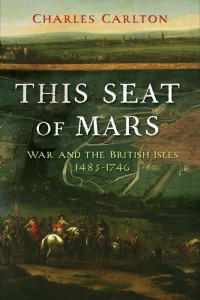 Charles Carlton is Professor Emeritus of History at North Carolina State University. Born in England, he was educated at Cardiff University and the University of California, Los Angeles. For five years he was a part time soldier in the Territorial Army, serving as an officer in the Welsh Regiment, the Special Air Service Regiment and the Intelligence Corps. He is the author of fourteen books, including Going to the Wars: The Experience of the British Civil Wars, 1638-1651.

This Seat of Mars War and the British Isles, 1485-1746 is available now from Yale University Press.