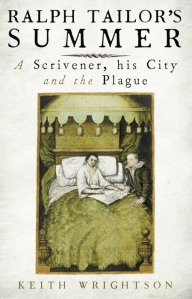 Ralph Tailor’s Summer is a hugely moving book that looks at the plague of 1636 and its impact on an English city through the eyes of a young scrivener, Ralph Tailor. Keith Wrightson reconstructs life in seventeenth-century Newcastle-upon-Tyne and envisions what such a calamitous decimation of the population must have meant for personal, familial and social relations. Here we present an extract from the beginning of Wrightson’s book, where the author explains how he came to discover Ralph Tailor and his arresting story.

Extract from Ralph Tailor’s Summer: A Scrivener, His City and the Plague by Keith Wrightson

It was his signature that first drew me to Ralph Tailor: An elaborate and distinctive signature placed at the bottom of a deposition made before the Consistory Court of the bishop of Durham in February 1637. The “R” is large and confident, almost brash, with loops to the side, one of which extends boldly to the right to become the horizontal line of the first letter of his surname. It seems the product of one elaborate swirl of the pen. Then the stem of the “T” is executed as a skein of swirling loops. The “l” sweeps up to touch the horizontal before curling around it. The final “r” extends down into a further eddy of loops. The effect of the whole is arresting in its extravagance.

This impressive display of penmanship lies a quarter of the way down one of the folios of a fragment of a deposition book, in a box described by the Archives and Special Collections Department of Durham University Library as “Box of loose depositions, 1633–4, 1637, 1662–6”. I was examining it simply because it was a collection of fragments. The series of large bound volumes of Consistory Court depositions ends in 1631. I was short of time and thought I could best use this afternoon in the archives by skimming these fragments to see whether they contained anything useful for the project on which I was then engaged: check them out; eliminate them from the research plan. So I thought.

Historical records have a way of confounding such complacent expectations. They reveal unanticipated things. They disrupt the progress of attempts to sweep too purposefully through the evidence that they provide, to commandeer rather than heed it. I was finding a few things for my then purpose, but was more or less on automatic pilot when I encountered Ralph Tailor’s signature. It caught my eye simply because it was so very different from the stiff and laboured autographs, or more often the simple marks, with which witnesses usually signed their depositions in this period when only a minority knew how to write, and even those who had the skill to do so might use it rarely and sometimes clumsily.

My curiosity aroused, I turned back a page and began to read the deposition. The formal heading identifying the witness told me that Ralph Tailor was from Newcastle-upon-Tyne and that he was twenty-six years old. I read on, and the story that he told soon captured my full attention. He described how, “upon the eight of August last”, having been “sent for” to come to the house of Thomas Holmes, he climbed up “upon the townes wall of Newcastle adioyning of the key nere the river”, and standing on the wall “over against [Holmes’] window where he then lay, he the said [Holmes] speakinge through the same window did by worde of mouth declare his last will”. This Ralph “did presentlie after comitt to writeing as now it is and after the writeinge therof . . . he redd the same to the said testator whoe very sensiblie did acknowledge the same for his last will and testament”. Also present “and hearinge” were John Hunter and Hugh Ridley, both of whom “subscribed their hands and marks thereunto”. Pressed on a couple of points by the court, Ralph added that Holmes, “being then extreame sick”, had retired after he had “declared himself”, but “after the writeing therof he came againe to the same window and acknowledged it”. Ralph also admitted that since the writing of the will he had indeed said “that he was not certaine whether the testator was of perfect mynde and memory at the makeinge therof yea or noe”. That was scarcely surprising. The man declaring his final wishes from an upper room to the scribe and witnesses on the wall was confined there because he was dying of the plague.

Intrigued by this vivid scene, I checked the search room’s card index of probate records to see whether the will of Thomas Holmes survived. It did. I filled out a request slip, and a few minutes later I was looking at the document that Ralph Tailor had written that day upon the city wall. It is short – only eighteen lines – and bears some signs of the circumstances of its composition. The hand is clear but seems hurried. It is certainly less neatly executed than the accompanying inventory of Thomas Holmes’ goods, which was also prepared by Ralph Tailor (along with John Hunter and two other men) some two months later. I thought I could detect a slight slant to the lines, possibly occasioned by using a writing board awkwardly propped on the parapet of the wall, but perhaps that was fanciful. The signature of the scribe, however, is a beauty: just like that beneath the deposition, but executed with yet more panache; three times the size of the simple signature of John Hunter, and starkly contrasting, in its elegance, with the wobbly mark that Hugh Ridley managed to scratch beside his name.

The will describes Thomas Holmes as a “yeoman”, a term implying middling social status in this urban context, rather than his actual occupation. In fact, he was a keelman. He made his living transporting coal in a keel boat from the pits that lay close to the Tyne, downriver to the colliers that shipped it to supply the fuel needs of London and other coastal cities, or to the urban markets of continental Europe. He left his half-share in “the cole bote I goe in my selfe” to Hugh Ridley, “my cozen”, “if he live soe long”; a telling qualification. Modest bequests in cash were made to two married daughters – suggesting that he was around fifty years old – another cousin, and a brother and a sister, and “all the rest” went to his wife, Ann, who was also named as executor. The will was of course “nuncupative”, made “by word of mouth” and unsigned by the testator. The inventory specifies the contents of a three-room house consisting of a hall, kitchen, and loft room. Holmes was surely in the latter when he declared his will through the window.

I took some notes, thinking I would certainly find a use for this striking material one day. It had refreshed me. I moved on. On the next folio, however, I came upon another reference to Ralph Tailor – mentioned by a witness in a different case. There was yet another on folio 12. On folio 13 he popped up again, giving evidence in a further cause, and I now learned that he was a scrivener, a writer of documents by trade. That explained the superb signature: this young man was a professional penman.

On folio 23v he appeared again in yet another case, and when I opened the next folder for 1637, I soon encountered him once more. This fragment of a dismembered deposition book begins on folio 84; he appears on folio 85, giving evidence a few months after his first appearance. “Ra: Tailor, 26 – our old friend,” I pencilled in my notes, before reading another peculiarly arresting deposition. By now I also knew that his name was pronounced “Raiph” or “Raph”: that was how the court scribes took it down phonetically when other witnesses referred to him. All of the incidents recorded related to an outbreak of the plague in Newcastle in the summer of 1636, and I now knew that the records contained a good deal more of the same. Given their fragmentary nature, a lot had probably been lost forever. But much survived, and Ralph Tailor’s presence seemed to run through it like a connecting thread.

I left the library that afternoon preoccupied with Ralph Tailor. His recorded words, and the stories told by him and his fellow witnesses, had caught my imagination. There was still time to walk down Palace Green and slip into Durham Cathedral, turning right into the Galilee Chapel at the cathedral’s western extremity. It was quiet, as it usually is, and bright; the warm light of late afternoon soothing the severity of the elaborate dog-tooth chevrons decorating the arches that spring across the chapel on clusters of slim columns. I knew that this was probably where Ralph Tailor had made his depositions to the Consistory Court in the late winter and early spring of 1637, 368 years before. The court met here. What would he have seen? There are faded medieval paintings on the inner wall. He would not have looked at them: they had been whitewashed out almost a century before his time in the destructive zeal of the Reformation and not yet been rediscovered. From the two small windows in the west wall one can look across the wooded gorge of the river Wear to South Street on the other side. He might have glanced at the view as he waited for the court to hear the causes in which he was concerned. But perhaps there was more to distract his attention. It would have been busy here on court days. There were probably chairs and desks for the court officials in the space before the present altar; clerks; proctors to plead cases; witnesses waiting, whispering nervously; tables piled with papers exhibited before the court; wills, inventories, and recorded testimony. One thing he might have observed, though. As a visitor to the cathedral noted in 1634, “in the Galliley, or Lady Chappell… is the marble Tombe of venerable st. Bede”. It is there still, and there is an appropriateness in the fact that the dust of the eighth-century author of the Ecclesiastical History of the English People lies in this space where so many documents were made and exhibited; the records from which history can be created. “Time, then, is locked in this place, but its passage is also recorded. Its presence, whether still-stand or passage, contributes to a spirit of reflection and quiet.”

I felt as I sat there that I had stumbled on a job to be done. I would put to bed the project on which I had been working and come back next year to dig deeper into the records generated by the Newcastle plague of 1636. And I was already pretty sure that Ralph Tailor would be at the centre of it. He seemed to have tugged at my sleeve.

Keith Wrightson is the Townsend Professor of History at Yale University.

The extract is taken from the preface of Ralph Tailor’s Summer: A Scrivener, His City and the Plague, available now from Yale University Press. Wrightson is also the author of Earthly Necessities: Economic Lives in Early Modern Britain, an elegantly constructed redefinition of the economic history of the time.

Apethorpe – a house fit for kings, and queens