If you have seen the news this morning you will have heard the exciting story that China is currently in talks over buying Italian debt. The hope is that Biejing investment will help tackle the escalating Eurozone crisis. Continuing her regular column, top economic commentator and What’s Next? author Lyric Hale looks at the Italian debt crisis and the Eurozone in general, providing a thorough analysis from contributor and Times columnist Anatole Kaletsky.

“It’s been very, very damaging to the US economy this summer,” Geithner said of the EU sovereign debt crisis.” (Agence France Presse)

Anatole Kaletsky is the author of the chapter “The World Bets on Europe but the United States Will Probably Win” written about nine months ago for our book What’s Next? At the time, Greece was of course a concern, but on the whole Europe looked much stronger than the US, especially in the financial sector. Today, things have changed, and Mr Kaletsky seems to have been particularly prescient in his observation that Europe’s troubles were more serious than those in the US.

More recently, last month in his column for the Times of London, he has said that Europe’s next financial hurricane is about to hit:

“The endgame for Europe is approaching and much faster than anyone expected… The upshot is that Europe now has to come up with a comprehensive and convincing solution to its debt crisis more urgently than anyone had imagined a few days ago. For if the flow of money out of the Italian bond market accelerates through the summer, the crisis could spin out of control, causing a break-up of the euro as early as September or October, the ‘financial hurricane season’ when serious financial disruptions generally occur.”

Back in 2006, Kaletsky wrote a famous article explaining why hurricane season in the United States was also a period of financial disruption:

“This ordeal is the financial hurricane season that runs from late August until mid-October. If there is going to be a financial accident of some kind on the way to the Goldilocks expansion, it is most likely to happen in the next two months. Nearly all the greatest financial accidents — the Wall Street crashes of 1929 and 1987, Nixon’s closure of the Bretton Woods gold window in 1971, the Asian currency crisis of 1997, the Mexican and Russian defaults, the attack on the French franc in 1993, the sterling devaluations of 1949, 1976 and 1992 — have occurred between late August and October.” 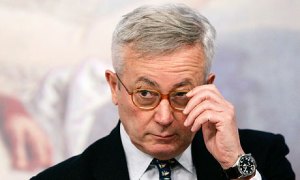 Indeed, Italian bonds face massive redemptions of about 60B Euros this month, which the ECB is trying to ameliorate. China is said to be interested in investing in Italy, and this has been a spot of good news for Asian markets today. It is now widely expected that Greece will have some sort of “orderly” default in a matter of days, not weeks, certainly within Kaletsky’s hurricane season timeframe, and one can only imagine the civil reaction on the streets of Athens.

There is no doubt that this will be a historic autumn in European financial history. For the Atlantic community as a whole, this is a financial crisis that threatens to unwind the process of European integration which began after World War II with US enthusiasm and support.

One has to ask, was the Euro a mistake? Economist Robert Mundell, widely thought of as the godfather of the Euro, has no regrets. He sees the problem as primarily a debt crisis, and has publicly warned that should Greece default, the ensuing bank runs would be disastrous. He favors a fixed exchange rate of $1.30/ 1 euro. A recent report by UBS outlined an alternate scenario in which Germany abandons the euro, and the projected costs are astronomical. The conventional wisdom is that there isn’t any way out, but in 1931, eighty years ago this Sunday, the UK did de-link from gold and disaster did not strike as was widely expected.

In spite of US admonitions, Germany seems to be preparing for some kind of managed default. Greek Finance Minister (certainly one of the most difficult jobs on the planet!) Evangelos Venizelos told Bloomberg this weekend “Greece is too small to be a catalyst for the future of the euro area,” he said. “It accounts for 2 percent of the GDP of the euro area and less than 3 percent of the area’s debt. We can’t let our country become a pretext for divisions that aren’t about us.” US Treasury Secretary Geithner agrees, and claims that Germany has the financial capacity to solve the Greek crisis, avoiding further contagion. There will be more such statements from Poland later this week, where Geithner will attend the meeting of Eurozone finance ministers for the first time.

In a television dramatization, Christine Lagarde, in her role as French finance minister, can be seen admonishing Hank Paulson about his role in letting Lehman collapse in 2008. Soon, Angela Merkel might allow an entire country to default. The US is too weary for schadenfreude, but it is evident that Europe and the United States are now at the precipice of a new relationship, based upon shifting relative economic and political weaknesses on both continents. The early history of the United States can be reliably told through the lens of the financial support of various European nations. The dominance of the dollar over sterling rooted in World War I marked the swing of political power to the US. But only during the Depression was the entire Atlantic Community weakened simultaneously, leading to global misfortune.

In spite of the joint triumph in Libya, economic and political troubles persist, making it difficult for one partner to help the other. Perhaps the best that can be hoped for is that they inflict no harm upon each other. US opinion polls show that American citizens feel that Asia and the emerging economies such as Brazil are more important to their future than Europe. They fail to recognize the somewhat invisible cross-Atlantic integration that we take for granted—more than half of foreign investment in the US comes from Europe for example.

The near term crisis in the EU is both fascinating and frightening, but longer term I strongly believe that the global situation will vastly improve, perhaps because of my faith in technology. Jack Ma, the founder of Alibaba, one of the world’s most successful web businesses based in China, recently said that the current turmoil in the West is the result of growing pains of globalization. In spite of the gut-wrenching times we have experienced, I agree with him and think that in future we will see all of this as the basis of a new period of stability, and even prosperity. We just have to live through the storms.

What’s Next? Unconventional Wisdom on the Future of the World Economy by David Hale and Lyric Hale is available now from Yale University Press. Anatole Kaletsky, who contributes to the book is Editor-at-Large and Principal Economic Commentator of The Times, where he writes a thrice-fortnightly column on economics, politics and financial markets.

Five 2014 Paperbacks for your Pocket

Everyone enjoys a good paperback. The fun, cheerful alternative to its stuffy corset-wearing older sister the hardback, a…