These readable and beautifully-produced books explore the breadth and complexity of Jewish experience from antiquity through to the present day. The first in the series Sarah: The Life of Sarah Bernhardt has received universal praise in the literary press. The London Review of Books called it ‘suave, intelligent and always slyly entertaining’ which nicely encapsulates the inimitable Sarah Bernhardt herself.  This sums up perfectly what the Jewish Lives series aims to achieve: to create lively, deeply informed books by pairing up subjects with authors who have a intrinsic understanding of their lives.

Take a look at the books available in this fascinating series here, or visit the Yale University Press website. 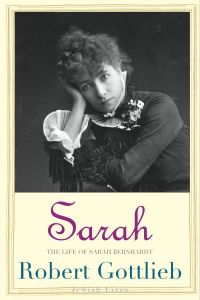 Everything about Sarah Bernhardt is fascinating: her obscure birth, her glorious career, her amazing romantic life and her indomitable spirit. Well into her seventies, after the amputation of her leg, she was performing under bombardment for soldiers during World War I, as well as crisscrossing America on her ninth American tour. Her family was also a source of curiosity: the mother she adored and who scorned her; her two half-sisters, who died young after lives of dissipation; and most of all, her son, Maurice, whom she worshiped and raised as an aristocrat.  Gottlieb’s Sarah is the first English-language biography to appear in decades. Brilliantly, it tracks the trajectory through which an illegitimate – and scandalous – daughter of a courtesan transformed herself into the most famous actress who ever lived, and into a national icon, a symbol of France. More

The ‘German Socrates’, Moses Mendelssohn (1729-1786) was the most influential Jewish thinker of the eighteenth and nineteenth centuries. A Berlin celebrity and a major figure in the Enlightenment, Mendelssohn suffered the indignities common to Jews of his time while formulating the philosophical foundations of a modern Judaism suited for a new age. His most influential books included a translation of the Bible into German that paved the way for generations of Jews to master the language of the larger culture. Feiner’s book is the first that offers a full, human portrait of this uncommonly modest  intellectual pioneer. Feiner examines Mendelssohn as father and husband, as a friend (Mendelssohn’s long-standing friendship with the German dramatist Gotthold Ephraim Lessing was seen as a model for Jews and non-Jews worldwide), as a tireless advocate for his people, and as an equally indefatigable spokesman for the paramount importance of intellectual independence. More

Tradition has it that King Solomon knew everything there was to know, but what do we know of him? Esteemed biblical scholar Steven Weitzman reintroduces readers to Solomon’s story and its surprising influence in shaping Western culture. He also examines what Solomon’s life, wisdom, and writings have come to mean for Jews, Christians, and Muslims over the past two thousand years. Weitzman’s Solomon is populated by a colourful cast of ambitious characters – Byzantine emperors, explorers, rabbis, saints, scientists, poets, archaeologists, trial judges, reggae singers, and movie-makers – whose common goal is to unearth the truth about Solomon’s life and wisdom. Even as it seeks to tell the story of ancient Israel’s greatest ruler, this insightful book is also a meditation on the Solomonic desire to know all of life’s secrets and on the role of this desire in world history. More

Hank Greenberg: The Hero Who Didn’t Want to be One – Published April 2011
Mark Kurlansky

Although Hank Greenberg was one of the first baseball players to challenge the legendary Babe Ruth’s single-season record of sixty home runs, it was the game Greenberg did not play for which he is best remembered. With his decision to sit out a 1934 game between his Tigers and the New York Yankees because it fell on Yom Kippur, Hank Greenberg became a hero to Jews throughout America. Yet, he was the quintessential secular Jew, and to celebrate him for his loyalty to religious observance is to ignore who this man was. In Hank Greenberg the best-selling author Mark Kurlansky explores the truth behind the quiet slugger’s legend: his Bronx boyhood in Crotona Park East, his spectacular discipline as an aspiring ballplayer, the complexity of his decision not to play on Yom Kippur, and the cultural context of virulent anti-Semitism – Detroit was the city of Father Coughlin and Henry Ford – in which his career played out. More

Meet Ivan Maisky: The Outbreak of the Second World War

In part three of our blog series celebrating publication of The Maisky Diaries, Gabriel Gorodetsky selects and introduces…